A deep passion for African wildlife has always been part and parcel of the du Toit family. With the knowledge and advice passed on by the late Johan Gerber, Piet du Toit Wildbedryf was born. This cattle and lucerne farm, farm Hoogeboomen, north-west of Rustenburg, developed and matured into the exotic game breeding farm it is today. Driven by strength and power of top genetics, Piet became a leader in offering exceptional animals and knowledge to the industry.

Piet believes that it is impossible to manage an investment successfully without 100% commitment, absolute passion and a supportive team. The advice of other successful breeders, experienced veterinary scientists and business mentors will thus always be deeply valued. Continued research and innovative business models are continuously implemented in the wildlife consortium. To Piet, the biggest priority at all times is the well-being of the animals and the accessibility for all to enter the industry.

After careful selection, the success recipe was expanded to include Sable bulls, such as Charlie, Tsunami, Hatari and Savuti. The female offspring of Madalla, Madiba, Piet, Rapella, Charlie, Mr. Perfect and Tsunami proofs to be amongst the best genetic variations.

Piet du Toit Wildbedryf also expanded to farms in the Limpopo Province, the Central and Southern parts of the Kalahari, and Namibia. 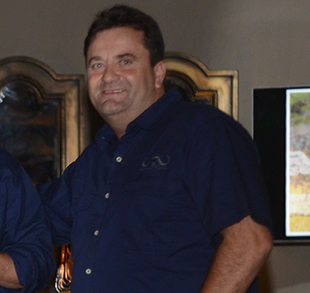 “We strive to provide a professional service, based on honesty, integrity and constant improvement. I commit to serve and give back to the industry and to help sustain it for future breeders in our country.”
Piet du Toit

(SALUTE TO THE KING)
Watch! The stately curve of horn
that sweeps and bows
to greet the royal tribe of Bovidae
So stood the king and held his regal head
in silent exposé.
Behold! A moment in time, a beast in his prime,
unchallenged by his royal limit!
Yield! Repose for an hour, a minute
and salute ye this king
who will not be sacrificed by his last breath,
but will live a king still in his death!
Bayete! Long live he
– that royal stature, that highly look –
in the stillness of my mind,
in the chambers of my heart
and here, on the wistful pages of my book.

There will be none other like him,
a Beautiful sight in nature he was,
showing absolute dominance.
His contribution will surely be missed.
His last breath was taken by the wind,
for his unrivalled legacy will carry on.
Matetsi is one of the most favourable bulls in the industry.
He left a legacy sought by many in the industry.

Watch this space for more info.

The synergy between nature and man,

sometimes creates something so unique…

A true Legend was born,

rising beyond his competitors.

There is no equal!

a True Sire to create a sequel.

The one and only